Before performing, it is important to understand the anatomical considerations involved in skeletal traction through the tibia. Since traction is being applied distal to the injured site, skeletal traction through the tibia is maintained via ligamentotaxis through the knee joint. Therefore before applying traction, it is critical to assess the ligamentous stability of the knee joint. The knee must be relatively stable in order to pull traction through the ligaments, specifically the medial and lateral collateral ligaments. The resident should assess varus and valgus stability of the knee grossly in 0 degrees flexion (or full extension) as well as 30 degrees of knee flexion, if possible. Both anterior and posterior stability can also be assessed if appropriate. Once the knee has been determined to be stable in the coronal plane, tibial traction can be performed.

The supplies needed for a proximal tibial traction pin are similar to that of distal femoral traction and include the following: 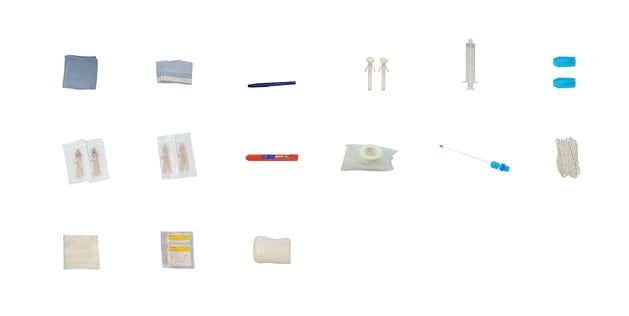 Tibial traction pins are applied from a lateral to medial direction, from an anatomic area that is known to be unknown. On the lateral aspect of the proximal tibia, the major neurovascular structure in the area is the common peroneal nerve. The common location for this nerve is approximately 2 cm distal to the fibular head as the common peroneal nerve crosses within the peroneus longus muscle into the anterior compartment of the lower leg. Although this nerve is out of the way of where a proximal tibial traction pin will be placed, it is good practice to understand and be aware of the neurovascular structures at risk. The other consideration to be aware of is the extent of the knee capsule distal to the knee joint. A study in the Journal of Orthopaedic Trauma demonstrated that the knee capsule can extend up to 14 mm distal to the knee joint. It is essential to place the proximal tibial traction pin extra-capsular and greater than this length in order to be at a safe distance away from the knee joint and to avoid intracapsular penetration potentially causing a septic knee joint. Once these anatomic considerations are understood, tibial traction can be performed.

While skeletal traction may be sound daunting at first, understanding anatomical considerations, being prepared with all necessary equipment, and following these clear and concise steps will lead to success.